The idea for this Van Gogh’s lucid dreams shoot came to me during a chat with Joanne Fleming, one of the most talented couturiers I know. I love, love doing styled shoots. It’s one of the best ways to test out luxury wedding cake ideas and concepts, build a portfolio and show clients your style.

To me, Vincent van Gogh is unmistakably one of the best known painters in the world. A pioneer of modernism, this master of colour and innovator produced an impeccable oeuvre which continues to inspire many artists today.

As a young painter in Holland, he had loved yellow and used it liberally in his early paintings.

In honour of the major exhibition at the Tate which brings together his dedication and thoughtful art, I came up with the concept of a happy, joyful styled shoot based on  Van Gogh’s love of yellow and blue.

Number 10 and No. 11 Carlton House Terrace currently houses the British Academy. The  premises built in 1831 to designs by John Nash, is steeped in history. It was previously occupied by four-times Prime Minister William Gladstone, and was a First World War Hospital for Wounded Officers.

The atrium with its very high ceilings and beautiful light was the perfect setting for this shoot. Whilst the white alcove with the yellow gold baroque detailing provided exquisite framing for a number of the shots, we took the presence of the modern art paintings on the walls in the shoot colours as a sign that our Van Gogh’s lucid dreams shoot would be best presented at the venue!

For this shoot, we tried to capture in 3D form, the textures and vivid tones found in several Van Gogh’s paintings including Cafe Terrace at Night, Irises, Chair,  Girl in White and of course Starry Night. We also referenced the fact that he loved a tipple or two and his pipe.  The tablescape created by Wild About featured their signature tall and elegant floral design. The outstanding overhanging flower canopy ran across the length of the table and featured different hues of yellow flowers from the deepest ochre VanGogh was famous for, to the palest and creamiest yellow. The flowers used included sunflowers, roses, oncidium dancing lady orchids, cymbidium orchids, Craspedia, Fritillaria, tulips as well as assorted greenery.

The texture and tone theme continued with WildAbout using texturised vases  some in glass, crackle glaze and velvet, in different hues of blue, including midnight blue, navy, teal and cerulean.  The vases housed clever groupings of more gorgeous yellow flowers. The gold candlesticks were topped with candles in royal blue and cornflower blue.

Ananya Cards, created beautiful deep blue stationery edged in gold which featured a specially created monogram and the most elegant calligraphy. The menus were placed on mini easels, as a nod to the artist.  The table linen was from Just 4 Linen and gold edged yellow velvet chairs completed the look.

WildAbout also created three bouquets for the shoot. Two were  yellow and the third made up entirely of Irises. 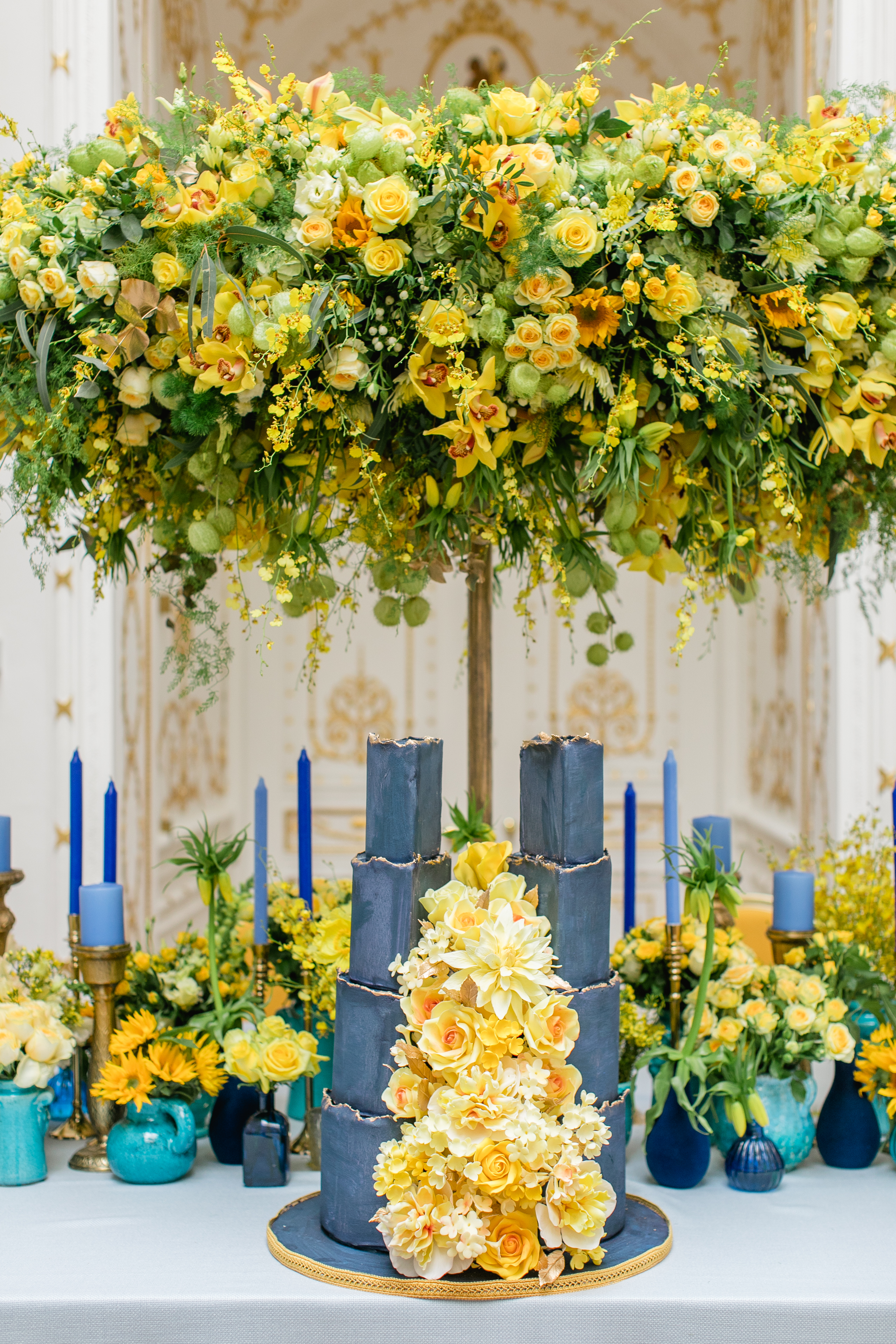 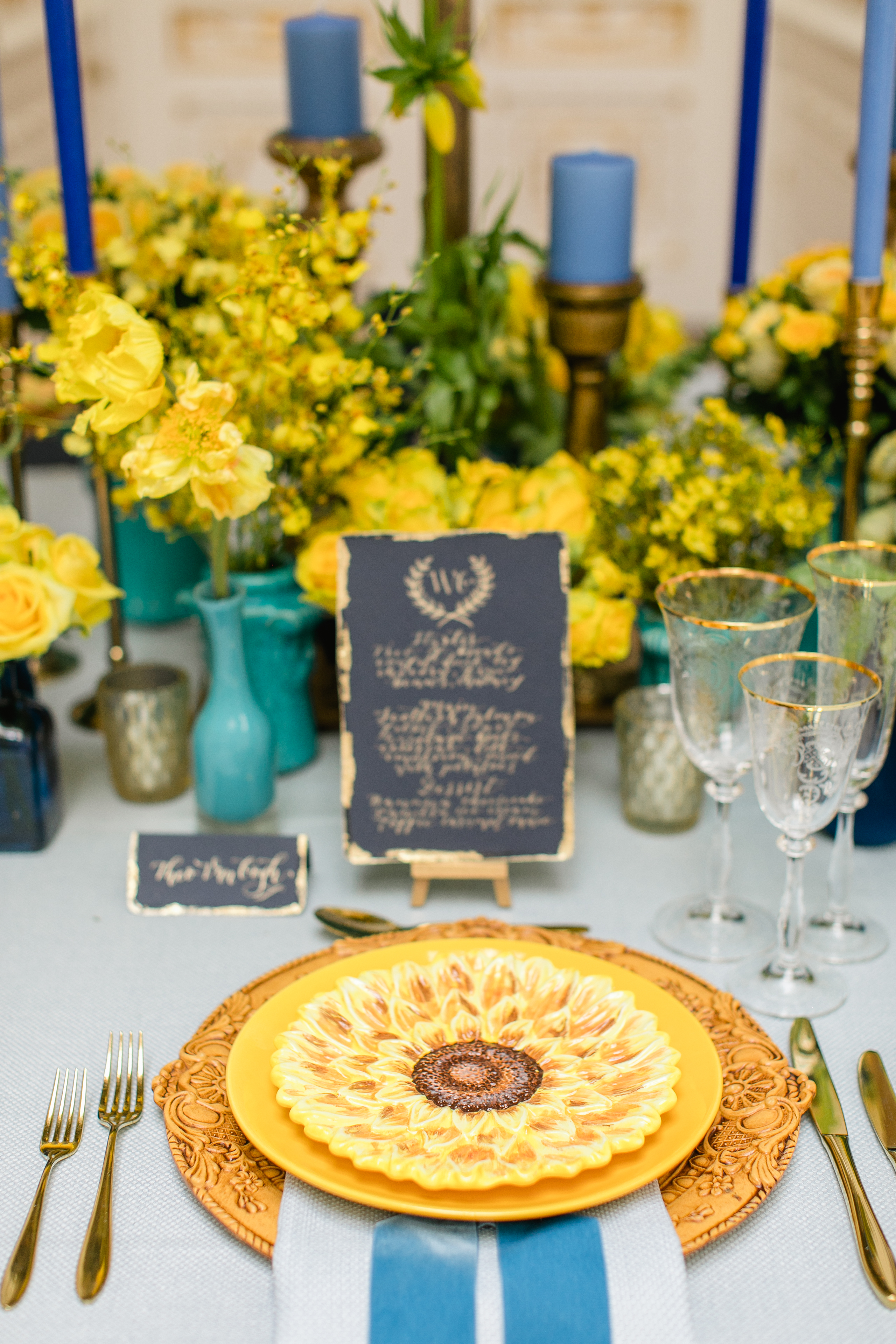 Reminiscent of Van Gogh’s Girl in White, for the first look, our model wore a high waisted skirt with boned foundation and deep pockets  made in heavy ivory French linen and paired with a silk chiffon and swiss-dot tulle peasant bodice for an informal bridal look. The skirt  embellished with a pair of Victorian embroidered sunflowers from Joanne’s collection of vintage trims, and the luxuriously ruffled sleeve cuffs were made from lengths of unused old stock antique lace.

The look was finished with a pair of Harriet Wilde’s classic block heel ‘Lana’ shoes in bridal ivory, and the hat from Jo’s personal collection which is trimmed with the same Swiss-dot tulle as the blouse.

For the second look Jo wanted to conjure those iconic VanGogh paintings of yellow ochre wheat fields and Provençal sunflowers. The corset waist skirt was constructed in slubby silk tussah for a homespun rustic look, and  embroidered with knee high stalks and ears of wheat. The high ruffle-necked blouse was made from tulle embroidered with little sunflowers that have all been hand tinted in shades of golden yellow and burnt sienna. Again, Jo used a length of antique Victorian lace, hand painted to match, for the collar and cuffs, to provide that connection to the past.

The shoes are a pair of Kurt Geiger ‘Daisy’ linen platform sandals, with the daisies converted to sunflowers with the help of silk paints!

For the third look, Jo created a more sophisticated look inspired by that glorious yellow ochre shade that glows from so many of Vincent’s paintings of the South of France. Supple shimmering silk satin skims and flows around the body, catching and reflecting the light. A huge stylised sunflower is the only embellishment on this gown, which is paired with Harriet Wilde’s fabulous ‘Arabella’ shoes in midnight blue velvet….. the combination of golden yellow and rich blue evoking the jewel tones of  ‘Starry Night over the Rhone’ and ‘Café Terrace at Night’. A Lomax and Skinner curled feather headdress adds a little Moulin Rouge showgirl glamour to the look.

The hair and make up for this shoot was by the amazing duo of Sylwia Kunysz and Stacey Goodwin. For the first Girl in White look, we used a soft and natural palette on the face, the hair in a soft tousled up do with some loose tendrils framing the face, working with the models own natural curls to create a relaxed look. It was good way to pay homage to the painting, giving it a modern twist. For the second look, the hair was soft and loose, the team creating a 30s inspired look with bold lip to complement the gorgeous silk ochre dress.

For this shoot, I created four luxury wedding cakes, cupcakes, cookies and mini chocolate magnums. The main cake was a 7 tiered Van Gogh mottled deep blue baroque confection. The baroque detailing gave the cake grandeur and the yellow sugar flowers adorning the cake were in different shades of yellow. The handcrafted sugar flowers included tulips, roses, dahlias, peonies and gold leaves. The second cake was a blue gravity defying split cake  with hundreds of yellow sugar flowers seemingly cascading out of the centre. This cake was created to reflect the prolific art that poured out of  Van Gogh despite the darkness that often over took him. The other cakes were distressed and decorated with bas relief, gold leaf, wafer paper and crackled effect and symbolised the fact that art is often never perfect! 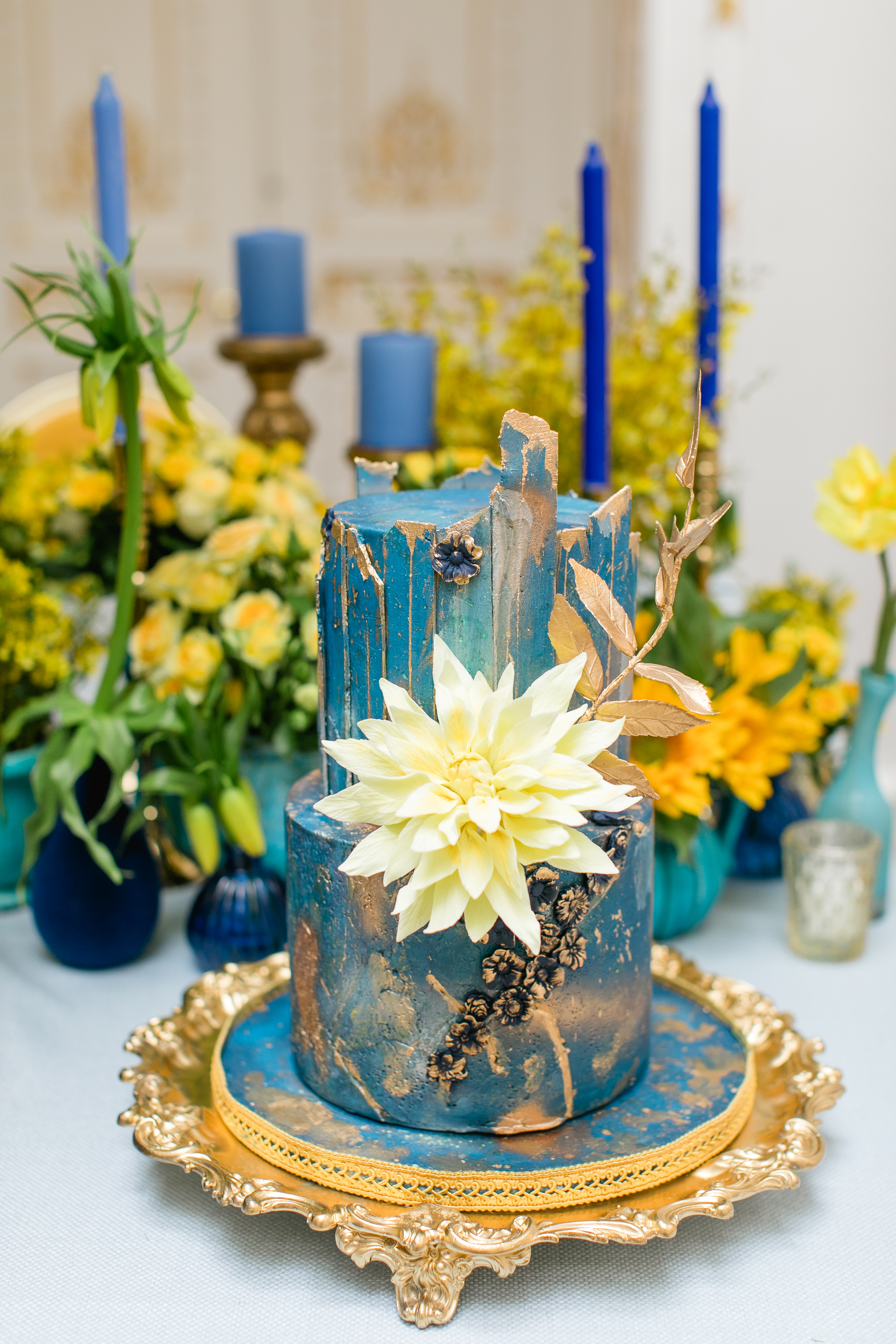 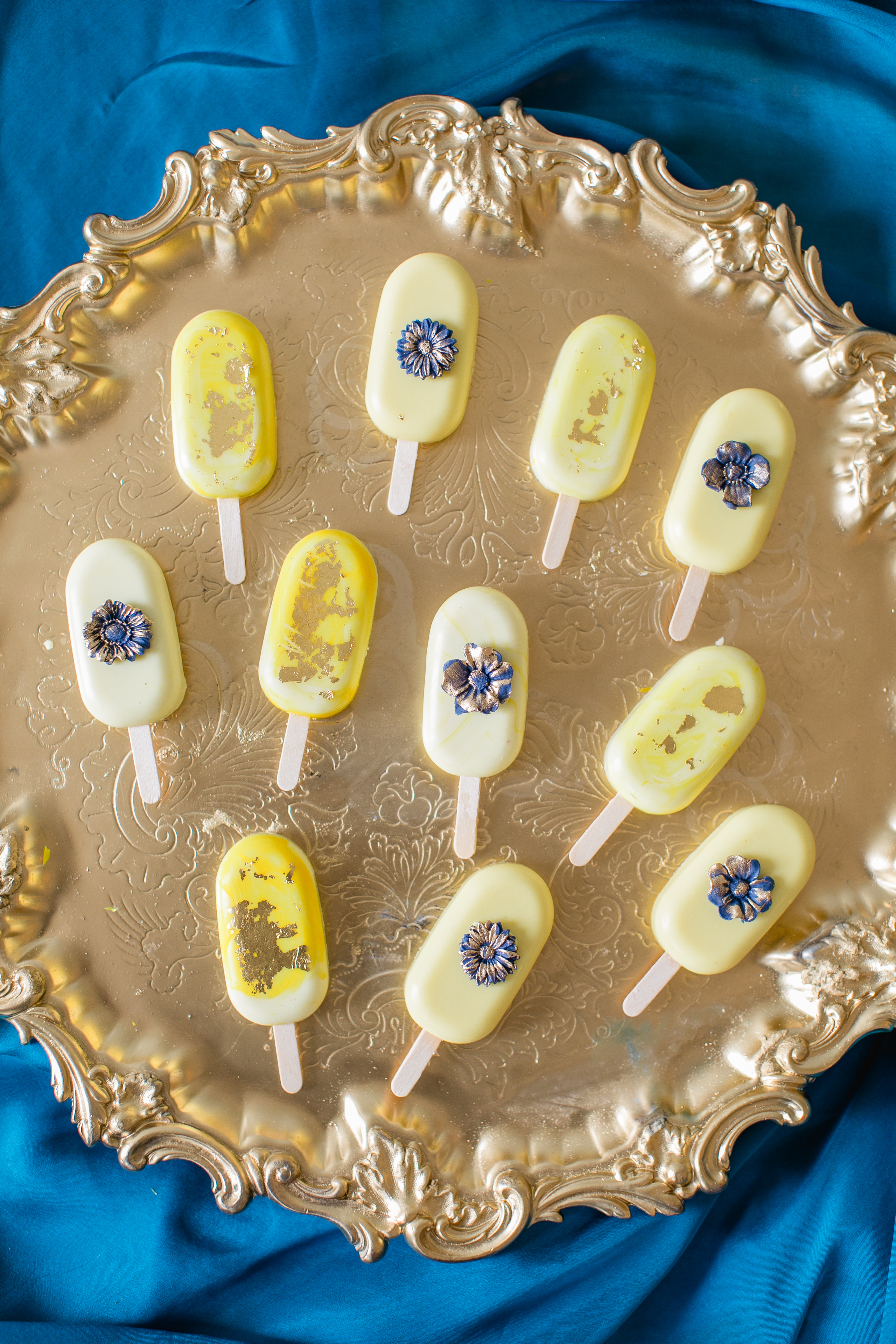 We were honoured to have one of the most sought after luxury fine art photographers in the UK, Roberta Facchini capture this shoot in all its glory. We can all agree that she has succeeded in showcasing the essence of Van Gogh’s Lucid Dreams.

HAIR and MAKE UP